a blog about Kilt and her kids plus Trouble our JRT mascot.

While docked in Victoria for a day on our cruise, my girlfriend wanted to see Bouchart Gardens.  I have been to Bouchart, but didn't mind going again since it had been years since I was last there.  But, I said if we are going to Bouchart I want to stop off in the morning at the Butterfly Gardens that was close by.  I'm so glad we did.  It was small, but very enchanting to say the least.  And, it was a photographer's mecca.  I didn't see that many beautifully colored butterflies, but they had a small pond with two Flamingos and lots of Koi in the center of the garden that captured most of my attention.  The colors were so vivid...like that of an artist's palette.  I hope you enjoy these photos I took while there.
I have become a bit lazy in my 60's and don't like to haul around large or heavy camera equipment.  But, obviously I love to take photographs.  My last pocket digital was a Canon that I bought used on Ebay for $70.00.  I have an upgrade now...a new Canon which cost several hundred. It is a Power Shot SX 260 HS.  And, quite frankly, I think the cheaper used one took better photos.  I dropped it a bit too any times on the pavement. :0)  The only reason I tell you this is that I am asked many times, "What camera do you use?"  The editing program I use is a free one on line,  PicMon. 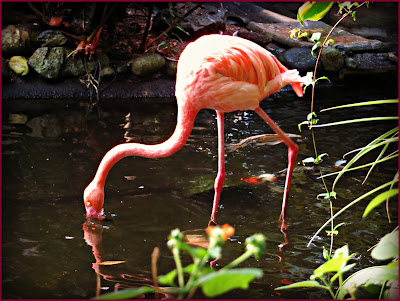 I have a thing for Flamingos.  Always have.  The gardens were very small.  I don't think they were much bigger than the downstairs of our house and we live in a tiny house.  Most of the butterflies were imported from the Philippines.  In the middle of the garden they had two Flamingos and some Koi.  The gardens were temperature controlled, so they were full of exotic plants. 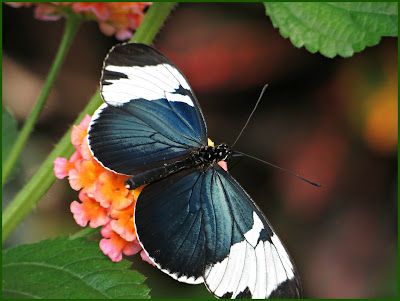 I believe this is a Black/White Helicon butterfly lighting on a pink flower.  Thanks to Mary who purchased a butterfly photo poster for me, so I could identify what I was taking pictures of at the butterfly gardens. 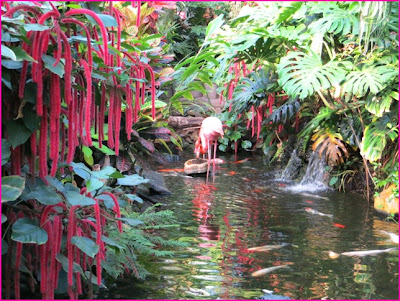 This was the most BEAUTIFUL scene.   The colorful exotic plants, the pink Flamingo, and the Koi.  I could have sat on a bench and watched them all day. 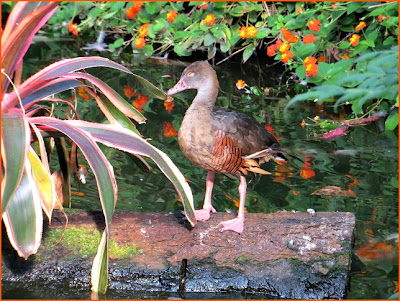 A little duck sitting on a colorful log with a very colorful background. 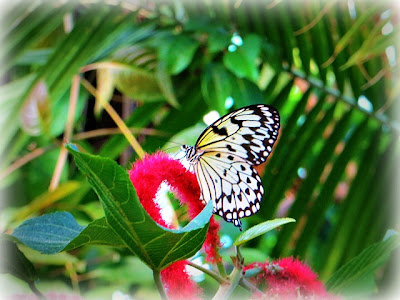 A White Tree Nymph butterfly.  As I was taking photos butterflies were literally landing on my hair, shoulders, etc.  It was way cool. 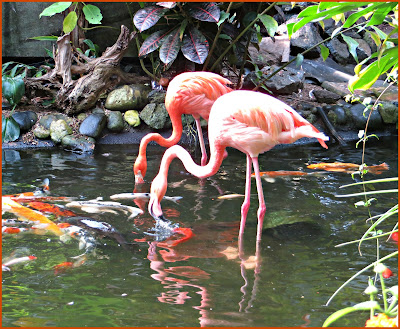 I love the silhouette of the Flamingos in the water and the Koi in this photo.  The lines are so graceful. 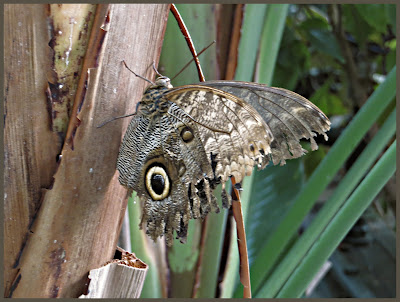 This is a Giant Owl Butterfly. 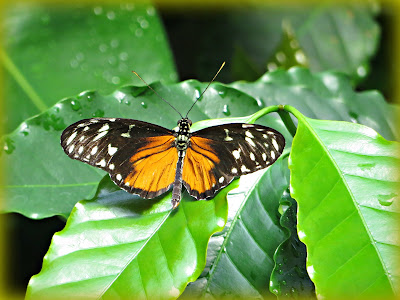 This is some type of Swallowtail (me thinks) 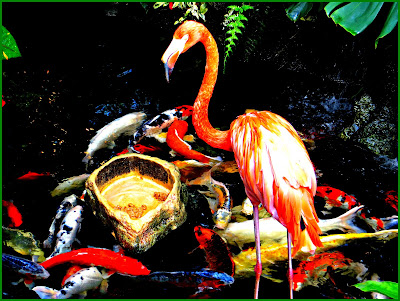 I made the colors in this photo a little more vivid.  But, actually the unretouched photos look much better ;0) 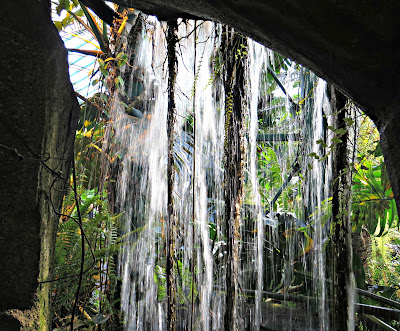 A bit of a waterfall in the Gardens.  You can imagine the humidity was quite high.  I saw some Papaya trees.  I guess they didn't want the Philippine butterflies to be homesick. :0) 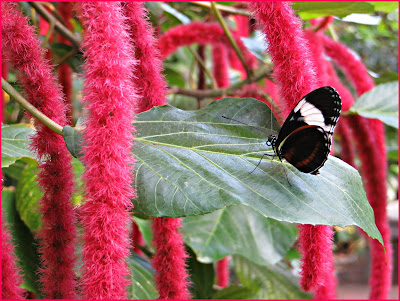 I don't know the name of the pink flowering shrub. 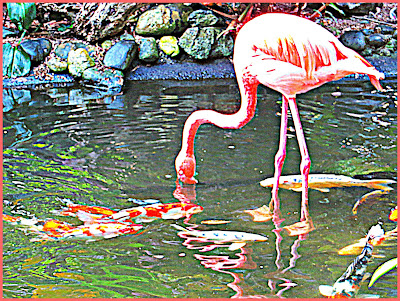 I just liked the colors of this photograph. 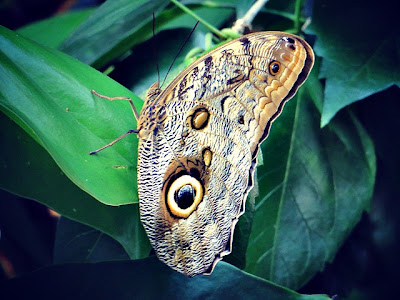 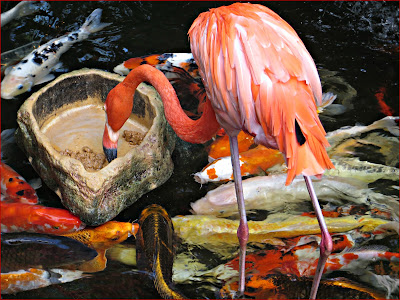 My most favorite unretouched photo.  Here the Koi are swarming/swimming as close as they can get to the Flamingo hoping it will drop a tiny morsel of food their way.  The colors look to me like that of an artist's palette.  It resembles a painting.  I may have to blow this up. 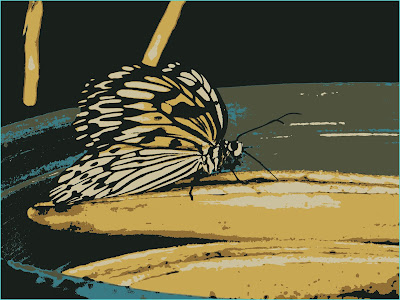 Last, but not least, another favorite photo of mine.  This is a White Tree Nymph butterfly landing on a feeder with some bananas.  So now you know what to put outside to get butterflies to land.
Every few days I will try to post some more photos of our 8 night wine cruise that started on Vancouver Island and sailed down the west coast.
Posted by gvmama at 12:54 PM

Those are beautiful photos!
Our kids went through those butterfly gardens many years ago.
The red/pink drooping flowers are Amaranthus (Loves-Lies-Bleeding) 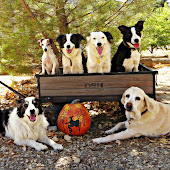 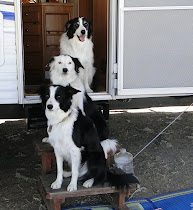 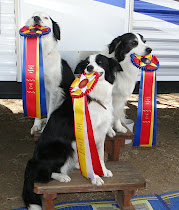 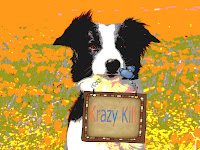 I have the right to remain silent, but the inability to do so!

She's not going to talk about that! 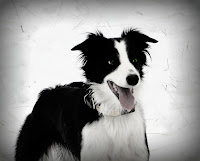 You want to know WHO is in charge?

Me and Baxter Black Me and Johnny McNally 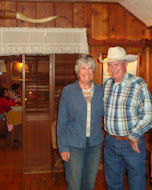 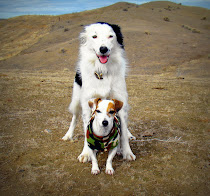 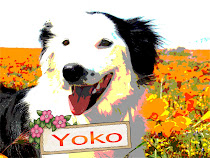 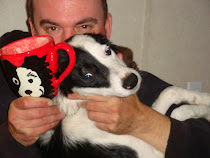 May I offer you 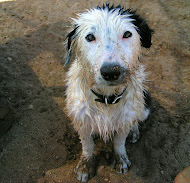 May I get into the car?

Time to go to work